So Thursday is Thanksgiving here in the US, and the day after that is so-called Black Friday. There's no better way to celebrate our national heritage than by glutting ourselves one day, and then being ravenous consumers the next, right? I'm setting the over-under on the number of people that will get trampled to death entering Walmart at a modest 17. Number of injured: 78.

But who am I kidding? I'm out to peddle my own shit to consumers too. The only difference is I'm plugging literature and thought-provoking discussions, which has got to be morally-superior to pushing iPhones, laptops, and all the other gizmos made in Chinese labor-camps/factories. Right? I hope so! Either way, if you're online this Friday, here's what I have going on. I hope you'll stop by one of the AMA chats and say hi!

I’m very excited to announce the release of Wulfram, free of charge exclusively on Wattpad. Wulfram, as you may know, is one of the key antagonists in Dreamwielder, and quite a bad-ass one if I may say so myself. In addition to being the only sanctioned sorcerer in the realm, he’s a shape-changer who is equally capable with claw and fang as he is with magic. Of all the characters in Dreamwielder, he racks up the biggest body count.

So, how did he become so cold and mercenary? That’s where Wulfram the story comes in. Set 44 years prior to Dreamwielder, this prequel tie-in chronicles young Wulfram at the tail end of the Dreamwielder War, when the Five Kingdoms are in chaos and his master has been killed. He is on a self-imposed quest to find the banished heir to the Sargothian throne, the boy prince Thedric Guderian. And find Guderian, he does, but the young prince is far from the salvation he seeks. 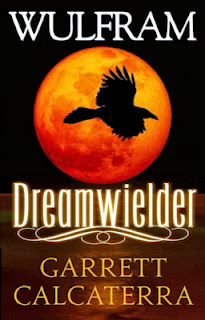 You can read the story for free on the Wattpad website, or if you prefer to read it on your e-reading device, simply install the Wattpad app and search for Wulfram or my name. And if you haven’t read Dreamwielder yet, find a free preview here.

This autumn has been an eventful season, full of big projects and literary events, and there's no slowing down in sight. Here's a quick and dirty recap of what's going on.

Myst﻿erious Galaxy Local Author Meet and Greet, Saturday, November 9, from 2:30-5:30 PM. I'm stoked to be one of the featured authors for this event. Swing by if you're local for a very cool, informal event. I'd love to meet with you and chat. I'll also have some books for sale, but don't worry I'm an author, not a used car salesman. See the Mysterious Galaxy website for more details.