Steampunk, Pirates, and George R.R. Martin, Amongst Other Things...

Yikes, it’s been over two months since my last post, and I do apologize. It’s been a busy Spring , as you might imagine, so here’s a quick recap—news of what’s been going on, and what’s to come. 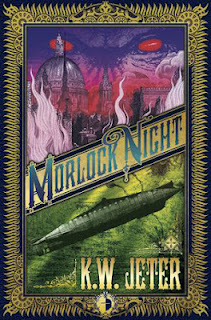 Steampunk – I’m finally done teaching for the academic year. It was a busy term with lots of lesson planning and grading, but for all my squawking and complaining I did have a great time with several of my classes, particularly the steampunk class I taught. It  gave me a proper excuse to read a lot of steampunk cannon, including Morlock Night, K.W. Jeter’s seminal steampunk novel, which is now back in print thanks to Angry Robot Books. It’s a fun, romping adventure with time travel, Merlin and King Arthur, and all kinds of steampunk milieu. In addition to Jeter’s novel, I also got a chance to delve into the past issues of Steampunk Magazine. It’s a very cool mag, especially considering the electronic version is free, though I found myself mostly drawn toward their non-fiction articles. Most of the fiction was a little too dense for my liking, and I can’t help but feel that a lot of the people caught up in the Steampunk sub-culture the magazine caters to probably take themselves too seriously (I mean, come on, you can’t take yourself that seriously when a big part of your subculture is playing dress-up), but there’s a lot to like about their philosophy in that it values a self-reliant, do it yourself ethos.