I'm very pleased to welcome a guest post from Misty Massey. You might recall, I interviewed Massey a few years ago to talk about her pirate fantasy novel, Mad Kestrel. She's stopped by today to talk about her newest project—this time in the role of editor. 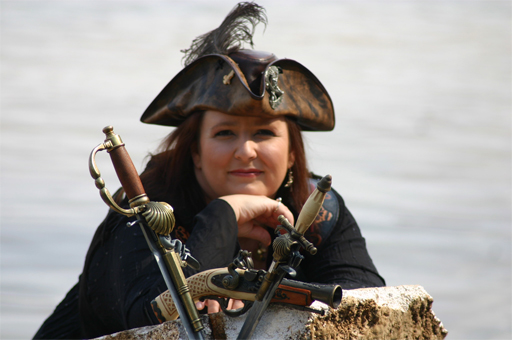 Hey y'all! I'm delighted to be Garrett's guest today! My name is Misty Massey, and until last summer, I was a mere writer of fantastic fiction and author of Mad Kestrel (pirates and magic and adventure...oh my!). I say 'until last summer' because that was when things became slightly more crazy and exciting in my world and I agreed to be an editor. I was a guest at Congregate, and I had just finished a rousing session of Live Action Slush. I was in the hallway chatting with my co-conspirators Emily Leverett and Margaret McGraw when the subject of publishing an anthology of weird western stories came up. We all thought it sounded like great fun, so we started approaching authors we believed would add to the thrill of such a project. Nearly all of them said "Yes!" (okay, a couple were squealing with excitement, but I'm not going to try to spell that sound for you!), so we started querying publishers. Danielle Ackley-McPhail of eSpec Books snapped us up, and before we knew it, we were running a Kickstarter to fund the project.

What is weird west? It's fantasy or science fiction set in the world (or the aesthetic) of the American western frontier. Movies like

Yes, I am still alive, although you wouldn’t know it judging by my inactivity in the online world the last several months. What can I say? It’s been a momentous time in the real world for me. I got married, moved, somehow kept up with the five writing classes I’m teaching, and still managed to finish writing The Faceless Enemy, the sequel to Dreamwielder. Something had to give (in addition to sleep), and that something was blogging and curating my social media sites. Things are quieting down now, though, so I’m back! Here’s what’s going on in my writing world.


-The Faceless Enemy is done! The sequel to Dreamwielder is even more high-action and fast-paced than the first book, and it’s a good deal darker, too—sort of my Empire Strikes Back part of the saga for Makarria, Caile, Natarios Rhodas, and a batch of new characters. Beta readers are going through the manuscript now, and it looks like I’m on track for a Spring 2015 release from Diversion Books. In the meantime, you can take a sneak peek of the pre-published version of Chapter 1, “Enter Darkness,” on Wattpad.

-I’m preparing a self-released ebook title called Page Fault. It’s a novella length story that’s part cyber-punk, part fantasy, and part post-apocalyptic fiction. The novella came about as part of a shared world project in the George R.R. Martin author study course I taught a few years ago at the Orange County School of Arts. Once I have the cover art procured, I’ll announce the official release date.

-My literary story “Choose Your Own Romance” is included in the newest issue (#116) of Confrontation, a prestigious journal that’s published the likes of Joyce Carol Oates, John Steinbeck, T.C. Boyle, and Arthur Miller over the years.

-My good friend and frequent collaborator Ahimsa Kerp recently released his debut novel, Empire of the Undead (Permuted Press). It’s a great novel, mashing up zombies and the Roman Empire—think The Walking Dead meets 300. I interviewed Ahimsa over at the Prose & Cons earlier this week, and he had some great things to say about geek culture, tattoos, and more.

That’s all for now. Happy holidays to everyone!