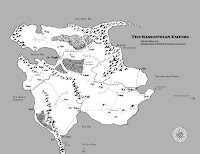 Well, it's been well over a month and a half since my last post, but I can honestly say I've not been idle. After finishing the first draft of Dreamwielder, I needed to take some time away from it for two purposes: 1) to give my peer reviewers a chance to read the damn thing, and 2) to give myself some distance so I could come back and look at the book with more objectivity.
So during that time I banged out the book proposal for This Book is Sh*t!, sent out the first batch of query letters to agents for This Book is Sh*t!, drew my map for Dreamwielder, and drafted my query letter for Dreamwielder. By then, the feedback was in from my reviewers and I turned my attention to revisions. There weren't any catastrophic problems with the first draft, and I actually enjoy the revision phase, so it went pretty fast. Most of the revision work consisted of fleshing out character motivation, ironing out some dialogue, and adding in scenes that were previously only summarized. All in all, I added about 3,500 new words to the book (knocking it up to 86,500 words), and the resulting product is 100X better. I'd like to officially thank my reviewers: Ahimsa Kerp, Eric Tryon, Mandy Burke, Craig Comer, my Aunt Linda, and my mother, Shirley Phillips. The critiques and suggestions they offered were critical in taking the book to the next level.
Read more »
Posted by Unknown at 7:25:00 PM 1 comment: