What Will be the Next Breakout SF/F Novel?

Sure, we've all heard of Suzanne Collins' Hunger Game series, J.K. Rowling's Harry Potter books, and more recently Nnedi Okorafor's Binti series, but what are some new under-the-radar SF/F pieces that deserve their time in the spotlight? Sometimes the best pieces are the ones found in the nooks and crannies of the literary universe; you just have to dig hard enough to find them. We took the Minotaur by the horns and have compiled a few book recommendations from esteemed SF/F reviewers to give you some suggestions on what book to pick up next!


Reading Recs from the Pros

I thought I had hit my vampire threshold until I read Silvia Moreno-Garcia’s Certain Dark Things. (My review at fantasyliterature.com is here.) Morena-Garcia shows us a new take on supernatural bloodsucking creatures, and she provides a gritty, Gibsonian Mexico City as a backdrop. The book gives us novelty by creating various “races” of vampires; our main character, Atl, is from a line indigenous to the Americas. She is described as avian and her family crest is the hummingbird. Other vamps are more in the Bram Stoker tradition, and there is infighting among the bloodlines. Atl, a rebellious party girl, is the sole survivor of an attack on her clan by an encroaching vampire crime family, and she’s fled to the supposedly vampire-free Mexico City. As you might imagine, it’s not vampire-free at all. Once there, she enlists the aid of a scrappy human street kid named Domingo. The descriptions of Mexico City are sharp, by turns gritty, beautiful and romantic.

Good news! The Kindle version of my short story collection, Dreamrush, is available to download for free on Amazon.com for the rest of the week (8/8/17 – 8/12/17). Get your free download here. 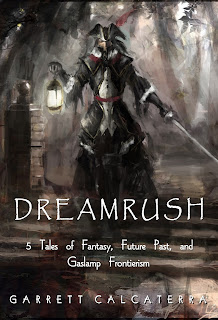 To celebrate, my intern-extraordinaire, Jayna Bosse, and I are hosting an author Q&A over on Facebook. So please do head on over there to hit me up with whatever burning questions you have, either about the stories in the book, the writing process, my favorite color, etc., etc. (after downloading the free book first, of course).

Lastly, to get some intel on the stories in the book (in case you're still not convinced), here's a great story-by-story review of Dreamrush from steampunk author Robyn Bennis.