Hats Off to the Ladies

(Authors Note, March 8, 2017: I just reread this post, as I'm about to share it on social media to help celebrate International Women's Day, and realize that while my heart was in the right place here, I could have worded things better in many instances. Let's just say I've learned a lot and grown as a person and a writer since I first wrote this in 2013. In the end, I'm happy to share some of the great women authors who helped inspire my Dreamwielder series, so here it is without further disclaimers.)


The Women Authors Who Influenced Dreamwielder

I was recently interviewed by my long-time friend and frequent collaborator Ahimsa Kerp over at Be Obscure Clearly, and one of the questions he asked me was who my favorite contemporary writers are. It didn’t occur to me at the time, but upon rereading the interview I realized there wasn’t a single woman author on the list. If you look over my previous blog posts here you’ll find more of the same—lots of mentions of Tolkien, Asimov, Burroughs, Bradbury, Martin, Powers, Blaylock, Bacigalupi, but no ladies. Apart from my interview with Misty Massey, there’s nary a mention of women authors.

The question I’m sure people are left asking is how could an author who seemingly doesn’t read women authors manage to write Dreamwielder, a book with a young woman as a protagonist and more female characters than male characters? The obvious answer would be that I have strong women who have influenced my life, and that’s definitely part of the story. In addition to my mother, Shirley, who literally dreamt up Makarria, I have a strong woman role model in my step-mom, Corine, as well as my four grandmothers and a slew of aunts, and then there’s my sister, half-sister, and my partner, Mandy. This is the first and most obvious answer, but not the only one.

The fact of the matter is I do read a lot of women authors, and they’ve played a big part in influencing the writer I am. For whatever reason I simply haven’t mentioned them often. It’s an all too common occurrence for women authors to go under noticed and under appreciated, so I’ve decided it’s high time I remedy my negligence. 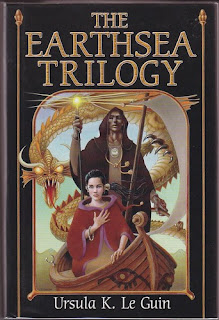 Ursula K. Le Guin – If Tolkien is the granddaddy of fantasy fiction, then Le Guin is the grandma. Wizard of Earthsea was published in 1968 and her Earthsea series has been a huge influence on the modern generation of fantasy writers. Without Earthsea there would be no Harry Potter. I’ve read the first three books of the Earthsea series and then a slew of Le Guin’s short stories. I’m ashamed to admit I still haven’t read The Left Hand of Darkness yet (I have it, but keep getting sidetracked), but even so, she’s one of my favorite writers and one I’ll always keep going back to. (Update 2017: I have since read The Left Hand of Darkness, and it's amazing!)

Lois Lowry – I’m not necessarily a big fan of kids books, or even YA for that matter. The so called YA novels that work for me aren’t the ones written down to a younger audience, but rather the novels written for everyone, from pre-teens to adults, and that’s what Lois Lowry does. The Giver is one of my all time favorite books. I rank it higher than Brave New World, and along with 1984 and Fahrenheit 451, it’s played a huge role in influencing the types of themes I like to explore in my fiction.

Mary Shelley – It’s been a long time since I’ve read Frankenstein, but even so, I’m highly aware of its impact on my writing, both directly and indirectly. You can make a strong case that Shelley invented science fiction. Frankenstein was first published in 1818, well before Jules Verne’s Journey to the Center of the Earth (1864) and H.G. Wells' The Time Machine (1896). That’s just cool. On top of that, the book is creepy and dark, it explores some fantastic themes, and I’d almost say it fits the steampunk aesthetic. It also happens to be an epistolary novel, which I’ve always had a soft spot for.


The Magical Realists
One of my favorite professors during my years as a graduate student at Chapman University was Pilar Rotella, an expert on magical realism and Latin American women authors. I must have taken a dozen courses with her, and while it was Rotella’s exuberance and vast knowledge that first drew me in, I quickly fell in love with the work of the women magical realism authors we read. Luisa Valenzuela came to be my favorite, but I also enjoyed the work of Isabel Allende, Marta Traba, Christina Peri Rossi, Rosario Castellanos, and probably a dozen others I can’t recall anymore. Collectively, these ladies really broadened my horizons. 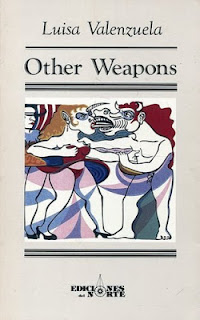 The idea of magical realism itself—that ghosts, spirits, and magic are as commonplace in some societies as food, water, and daily chores—gave me creative license to break away from a lot of tired fantasy tropes. And then there are the themes these ladies explore: sex, abuse, torture, misogyny, solitude, romance. It’s anything but romanticized, and yet the bad is tempered with love and a nurturing attitude, a complex dichotomy that made me grow up a lot and realize love and life are complicated, oftentimes messy. These amazing writers instilled into me an understanding of the inner strength women can possess. It’s absolutely a characteristic I incorporated into my characters Makarria, Taera, and even the female antagonists in Dreamwielder.

I should also include in this category the American authors Toni Morrison and Octavia Butler. I’m not weighing in on the debate as to whether they should be considered magical realists, but rather pointing out that these two women authors have affected me in the same way as the magical realists. Morrison’s Beloved and Jazz and Butler’s Wild Seed explore love, sex, abuse, and slavery, and all three books were eye-opening to me in the same way the work from the Latin American women authors was.


And Let’s Not Forget Nostalgia
Like many avid readers, I’ve been gobbling up fantasy and sci-fi books since I was in fourth or fifth grade. I moved on from The Hobbit, the Narnia series, and The Chronicles of Prydain by time I was in junior high and began reading contemporary adult genre books. These are the books—the ones we read during our formative years—we look back on fondly, even if they’re a bit flawed. Action, adventure, imagination, and wonderment trump all when you’re that age. At least that was the case for me. At the same time I was burning through books by David Eddings, Raymond Feist, Stephen R. Lawhead, and Terry Goodkind, I was reading some rollicking good books by women authors. I don’t remember a lot of details about them, but I do remember them fondly.

Anne McCaffrey – The Pern series had certainly been around for a while before my mother introduced them to me in junior high, but they were new and different to me. I don’t recall how far I got into the series, but I remember being pleasantly surprised to find that sci-fi and fantasy could be combined. Space colonization, telepathy, dragons: what else could you ask for?

Katherine Kurtz – Like the Pern series, I no longer remember how far I got into Kurtz’s Deryni series. There’s something like fifteen or twenty books and that seemed a bit excessive to me even back then, but I did get through at least the first set of five books. It was my first exposure to politics and religion in fantasy, and again I was bit surprised, this time to find that not all battles are carried out on a battlefield with sword and axe. It was also my first time reading any sort of historical fantasy. 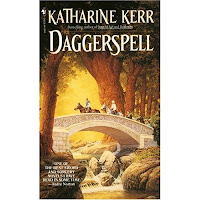 Katherine Kerr – I really don’t remember much about the Deverry series except that the two main characters kept reincarnating throughout the ages and they had a lot of sex. This was another first for me. I was probably thirteen or fourteen and it seemed scandalous to be reading sex scenes in a book. That’s probably why I liked them. I eventually gave up when I got tired of waiting for the newest book to come out, but I’ve always wanted to go back and pick up the series again.

Elizabeth Moon – I must’ve been in high school when I read The Deed of Paksenarrion, and I remember being pretty skeptical at first. Really, a woman who runs away to become a warrior and eventually a bad-ass paladin? Well, Moon quickly won me over. The fighting, the action, the battles, and the internal politics were all just as exciting and plausible as anything I’d read with male characters. There definitely has to be an influence there, because Dreamwielder has it’s share of ass-kicking women.

Who did I forget? I know there are a lot more, but that’s who comes to mind off the top of my head. Thank you all very much, ladies!