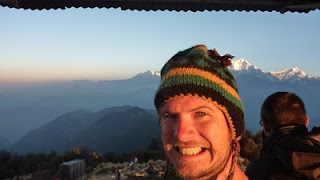 Ahimsa Kerp is a man not easily categorized. He can read a book faster than you can thumb through a magazine, he’s an insatiable backpacker and traveler, he has degrees in esoteric subjects like philosophy and history, he has tattoos that make D&D nerds green with envy, and he guzzles fine beers with the best of them. He’s also a writer and good friend of mine. His short story, “Turning On, Tuning In, and Dropping Out at the Mountains of Madness,” has just come out in the erotic, Cthulhu-mythos anthology, Cthulhurotica, and he’s one of my collaborators on the historic fantasy novel, The Roads to Baldairn Motte (along with Craig Comer).

I’m not big on New Year resolutions, but I do think it’s a good idea at this time of year to reflect back on the previous year, assess my writing performance, and see where I can improve. Well, shit, now that I put it that way, it sounds an awful like making New Year resolutions. Well, whatever it may be, I reread my blog post from this time last year and was reminded by how frustrated I was with my 2009 writing performance. 2010 turned out to be a much better year. I finally finished the first draft of Dreamwielder, and after sending out a couple batches of query letters, I’ve gotten a rewrite request from a big league agent. That rewrite is about ¾ of the way done as of right now and I hope to have the finalized rewrite sent off to the agent by the end of the month.
Read more »
Posted by Unknown at 6:41:00 PM No comments: