The History of Modern Fantasy Fiction (Sort of) – Part I

So, I’m teaching a fantasy writing course at the Orange County School of Arts, and it’s…well, pretty freaking fantastic! The students are highly enthusiastic, all are well-read for their age, and we’re having a grand time talking about things like world building, magic, exposition, and whatnot. Because the students are all high schoolers, though, their reading has been focused primarily on contemporary fantasy authors, so I’ve made an effort to expose them to some of the key authors in the evolution of modern fantasy writing. It’s no easy chore to pick only one author a week who represents a transformative moment in the genre, but here’s what we’ve gotten through so far, complete with reading recs and my thoughts. 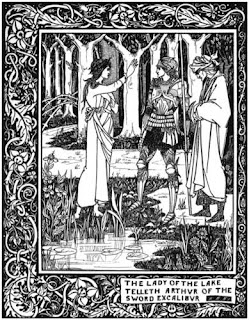 I have no qualms arguing that fantasy is the oldest genre of storytelling in the history of human civilization. Our earliest ancestors created fantastic tales to explain everything from the creation of Earth to why humans must experience suffering and pain. Fantasy authors have drawn from this well from the start, tapping into archetypes that are culturally, and perhaps even evolutionarily and spiritually, ingrained into us.

The most common inspirations for fantasy authors include Greek and Roman mythology, Norse mythology, Judeo-Christian mythology, Celtic mythology, Arthurian legend, and, to a lesser extent, Eastern mythology and philosophy (Taoism, for example, seems to be a big inspiration for Ursula K. LeGuin’s Earthsea series.)

Now, for the sake of defining limits for my class, I somewhat arbitrarily drew the starting cut-off line for “modern fantasy” as
the early 20th Century. My reasoning for this starting point is that Hugo Gernsback and the advent of pulp magazines propelled fantasy fiction (along with SF, horror, and action-adventure, of course) into the hands of a wider readership, and established fantasy as its own unique genre. That’s not to say no one was writing fantasy before that, and, in fact, many of the biggest influences on modern fantasy writers are pre-pulp era authors. I’m just arguing that prior to pulp magazines, fantasy writing was simply regarded as literature, right alongside any other form of literature.

Some noteworthy and still widely-read examples among these pre-modern fantasy works are Le Morte D’Arthur, The Roots of the Mountains (which was a huge influence on J.R.R. Tolkien), Peter Pan, Alice’s Adventures in Wonderland, The Wonderful Wizard of Oz, and probably many more titles I’m disparaging by forgetting…

The Pulp Era: Robert E. Howard and Sword & Sorcery
I sometimes wish I were alive a hundred years ago to experience the excitement of discovering new authors through pulp magazines. Like with any other era, there were dozens of fantasy gems published during the golden age of SF that are now lost to obscurity. Alas, I was born in the 70’s, so I’m left to analyze what’s available to us now. Either way, Robert Howard wasn’t about to go unnoticed. The way I see it, he is the godfather of modern fantasy. The creator of Conan, Kull, and Solomon Kane published dozens of fantasy stories between 1924 and his premature death in 1936, gracing magazines like Weird Tales with his blend of fictionalized pre-history, larger than life heroes, and pagan magic. Even after his death, his tales continued to be published and expanded upon by writers like L. Sprague de Camp.

Simply put, these were the stories that enchanted and inspired a new generation of writers to start writing fantasy. 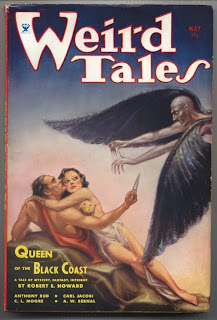 For my class, I chose to have us read “The Phoenix on the Sword,” Howard’s first Conan story to be published. It feels dated, but it’s still damn fun. The main discussion point for my class was the almost casual over-use of block-exposition and exposition in dialogue. To my mind, that’s the only significant thing that separates Howard’s fantasy from contemporary fantasy fiction. Howard is often maligned for focusing solely on plot and action, but he in fact created a rich milieu for his stories based on his expert knowledge of historical civilizations and figures. His world building is not as apparent as Tolkien’s, but we must keep in mind Howard was writing short stories, not a thousand page novel, so readers were only exposed to his milieu in bits and pieces. In many ways, Howard’s worlds and characters are more sinister and morally ambiguous than what readers became accustomed to with Tolkien (and decades of Tolkien knockoffs.)

(As a quick side note, or excuse if you will, I’ll say that it was with much consternation that I skipped Fritz Leiber’s Fafhrd and the Gray Mouser stories. They are certainly important in the history of modern fantasy, but I’m not sure they did anything beyond what Howard’s writing did to influence the direction in which fantasy evolved. Thoughts?)

From Fandom to Mass Market Success: J.R.R Tolkien
Pulp magazine readers were the equivalent of comic book readers in the 70’s or 80’s—yes, these fans comprised a good sized following, but it was pretty well limited to the close-knit fandom community. J.R.R. Tolkien changed all that for fantasy. The Hobbit, published in 1937, was a huge success, largely I would argue because it was geared towards children. So called mature adults are much more tolerant of “silly fantasy stories” if they’re reading them for their children. The Hobbit and C.S. Lewis’s Narnia series hooked readers and broke down the barriers between mainstream fiction and fantasy, so much so that when The Lord of the Rings (which clearly is not a children’s book) came out in 1954 it was embraced by readers well outside the pulp fandom community. 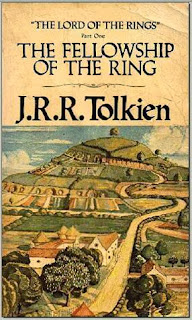 It’s actually pretty amazing—The Lord of the Rings was hugely popular despite being antithetical to the postmodern movement in literature that was taking place at the time, and it made fantasy fucking cool! You didn’t have to be a full on nerd to enjoy it. Hell, twenty years later, the biggest rock band in the world, Led Zeppelin, was peppering their lyrics with LOTR references. It doesn't get much cooler than that.

From a writer’s perspective, the most amazing thing about Tolkien has to be his world building; it was literally his life’s work, from creating his own languages, to creating a history to explain the etymology of his language, to essentially writing a bible for Middle-earth in The Silmarillion. For my class, we talked about the idea of a fictional world having two lives, the fully imagined one in the author’s mind, and the other one the reader sees on the page. To examine this, we discussed The Silmarillion and read two chapters from The Fellowship of the Ring, “A Journey in the Dark” and “The Bridge of Khazad Dum,” both of which do an expert job of slowly trickling in expositional tidbits to reveal the rich milieu Tolkien created. (For a quick and dirty recap of Tolkien's Middle-earth, see my post "The History of Ea." For my thoughts on why LOTR is more popular than The Silmarillion, check out my guest post at SF Signal.)


Moving Beyond Old White Dudes—Ursula K. LeGuin
Like any other genre of literature, fantasy tended to be written primarily by white males in the 20th Century (and perhaps it still is), but luckily Ursula K. LeGuin showed up to open some doors, not only for other female authors, but also to alternative philosophies in fantasy. 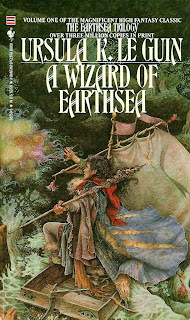 If the underlying premise of Tolkien’s world is a patriarchal one of divine creation and order (meaning conflict is caused by disorder or straying from divine intention), then the underlying premise of LeGuin’s world of Earthsea is natural order and balance. Published in 1968, A Wizard of Earthsea could almost be interpreted as blasphemously pagan. There is no divine creator or angels to sing a song of creation and beauty as we see in Tolkien’s world. There is no Melkor or Sauron to molest that divine creation and spawn evil. Instead, the conflict and evil in LeGuin’s world stems from greedy, ignorant people who wreck the natural balance in the world.

With the massive influence Tolkien’s writing has had on fantasy, LeGuin’s alternative world view was—and still is—much needed. On top of that, the Earthsea books are fantastic in and of themselves. A Wizard of Earthsea is regularly voted one of the top fantasy novels of all time. For my class, we read the opening chapter of A Wizard of Earthsea and used it to discuss magic, which LeGuin does a great job handling. Unlike in LOTR, where magical doings are shrouded in mystery, LeGuin’s system of magic is much more pragmatic in that it is rooted in gaining knowledge and experience of the true nature of things and learning their true names. 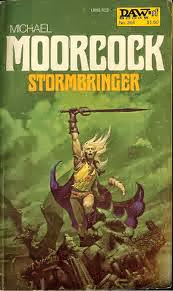 Michael Moorcock was more or less writing contemporaneously to LeGuin, and like LeGuin, he infused popular fantasy with a breath of fresh air. Tolkien knockoffs were hung up on the epic struggle between good and evil. Characters tended to be one or the other, and there was little in the way moral ambiguity in the struggles of the protagonists. Moorcock changed all that with his character Elric of Melnibone. Elric is an outcast amongst both his own race and humans, and he acts solely out of self-interest. Sometimes that leads him to do the “good” thing, but more often than not his actions are motivated by revenge or hatred. The very powers he draws upon are themselves morally ambiguous, whether it’s calling upon his hellish god Arioch to assist him or feeding souls to his sentient sword Stormbringer.

Countless fantasy authors have been influenced by Moorcock’s Elric saga (see, for example, Lou Anders' article Devouring Moorcock, or Neil Gaiman's open letter), and without Moorcock’s departure from old fantasy tropes I’m not sure fantasy would have evolved to the point where we could have morally ambiguous characters be so widely loved like they are today. Can you imagine a Tyrion or Jaime Lannister without Elric coming first?

For my class, we read the first part of “The Dreaming City” found in The Stealer of Souls, and we discussed character, as well as style in contemporary fantasy. Of all the authors we’ve read so far, Moorcock’s feels the most modern.


And Now What?
That’s as far as we’ve gotten so far and I’m struggling a bit with where to go next. I’ve basically gone in chronological order and have no clear idea how to move from the 1960s to the 70s and 80s and beyond. Thoughts? Suggestions? Hit me with it and feel free to point out the problems with how I’ve framed these four authors in the history of fantasy.