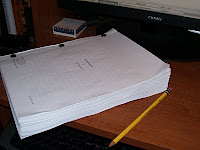 I am finally, finally done with the first draft of Dreamwielder. The climatic chapter was a beast to write. I spent damn near 20 hours on the single chapter alone, including one grueling 13-hour stint Saturday night where I nearly made it to the end, but fizzled out.

I make a habit of emailing myself the novel manuscript every time I add to it or make significant changes (just to make sure I have a back-up copy), and here's the transcript of my e-mail to myself when I finally crapped out early Sunday morning:
*
from Garrett Calcaterra
to gcalcaterra
date Sun, Feb 7, 2010 at 5:46 AM
subject Dreamwielder
mailed-by gmail.com
Message:
Fuck. 32... alolst
-me
Attch: Dreamwielder.doc 995K
Read more »
Posted by Unknown at 8:01:00 PM 1 comment:

It's official: "The Key Ring" was voted Best Horror Short Story of 2009 in the Preditors & Editors Readers Poll! Thanks to everyone who voted and passed on the word to others. I have to say, this is way better than just being in the phone book.
Anyhow, I'm hoping to get "The Key Ring" published in a stand alone book with another novella I wrote a while back, "The Shadow." The book is tentatively titled Umbral Visions, and I'm sending out query letters as we speak. I'll be sure to make it known if I get any bites.
In the meantime, I'm finishing up work on Dreamwielder and am still taking submission for This Book is Sh*t! I have accepted about six non-fiction pieces for the poop anthology so far and will begin searching for a publisher as soon as I wrap up Dreamwielder (hopefully by the end of next weekend).
That's all for now. I'm off to send out those query letters and prep for my awesome Zombies in Film & Literature class I teach this afternoon.
Thanks again and cheers!
-Garrett Calcaterra