Dreamwielder: From Inception to Publication

I am very happy to announce that I’ve signed a publishing contract with Diversion Books to publish my epic fantasy novel, Dreamwielder. Diversion publishes e-books only, and at first I was a little down on the idea of going with them, still being hung-up on the notion that I wanted to go with a traditional print publisher. However, after researching Diversion and taking a look at the publishers who were still potentially interested in the book, I quickly had a change of heart. Diversion is the real deal. I feel that they’re going to be able to reach a huge audience with my novel, and that’s what it’s all about. I don’t have a specific release date yet, but we’re tentatively due to launch the book in the Spring of 2013. Needless to say, I’m thrilled.

Now that the ink is dry on the contract and copyediting is underway, I thought I’d take a look back and see how long the process took, from the first inception of Makarria, the main protagonist of the novel, to the moment of signing the contract. Yikes! Once again, I’m reminded that writing isn’t a business for impatient people. Here’s how it played out.

Dec 2007
While back home visiting for the holidays, my mother told me she had come up with an idea she wanted me to write in a short story. Like all writers, I get this all the time—people always have “great ideas” they want me write. Seeing as how this was my mom, though, I said sure and sat down with a pen and paper to hear her out. To my pleasant surprise, the idea was a perfect premise for a novel. Her idea was actually a dream she had a week or two prior to my visit. In this dream, a princess is sleeping in a giant castle, and someone is beating at her bedroom door. The door finally opens and in rushes her parents to urgently shake her. When she wakes up, it all disappears: the castle, the fancy crowns, gowns, and all the other trappings of royalty. All that’s left is the girl and her parents in a tiny hovel. This idea became the opening chapter of Dreamwielder. My mother literally dreamt up the hero, Makarria.

June 2008
While the plot and characters were certainly percolating in my brain, I didn’t actually start writing anything until the beginning of that summer. I came up with names for my main characters and wrote the first paragraph of the book on June 21, 2008.

At that point, I realized, I had some serious world building to do before I could get very far into the book. This is something I neglected to do when writing my very first novel, Praxis of the Gods (unpublished). I spent a lot of time working on plot development for that book, but without a fully fleshed-out milieu, the story lacked depth and had none of the subtext or thematic resonance that a really good fantasy tale should have. I wasn’t about to make that same mistake again. This time around I wrote out the entire history of the realm, complete with legends, heroes, wars, conquest, subjugation of indigenous peoples, and social and political movements, not to mention the limitations and role of magic in the world. In addition to that, I wrote out the history of the antagonist, Thedric Guderian, and created thorough character sketches for all the main characters. And, of course, there was the map. 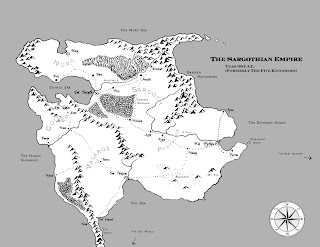 Tolkien’s Lord of the Rings and George R.R. Martin’s A Song of Ice and Fire novels certainly were a big influence in the world I created, but I made a conscious effort to make my world very American as opposed to British. I wanted a realm comprised of mixed cultures, a ruling class that was relatively new in the context of history, and a conflict that was predicated upon the idea of an obsession with technological progress to create a national identity. To that extent, I was also influenced by the steampunk genre.

I don’t have a clear timeline as to when I finished my outlining and world building and got back to writing, but it didn’t move quickly, that’s for sure…

August 2009
More than a year after starting, I was less than a quarter of the way into the first draft. As I said in my very first blog post here, “The book is entirely outlined and I've got about 100 pages written thus far.” I managed to keep making slow progress moving on into the Fall, but overall was frustrated with my slow progress.

January 2010
I had a few weeks off from teaching in December and January and was determined to finish the first draft. I made a valiant effort, cranking out 36,000 words in ten days, as chronicled in this post, but still had a ways to go. A few weeks later, on February 7 to be precise, I finally finished the first draft, as detailed in this delirious post.

At this point I e-mailed the draft off to my close network of readers and fellow writers. I got invaluable feedback from my Baldairn Motte collaborators Ahimsa Kerp and Craig Comer, as well as fellow Inkling Eric Tryon, and then, of course, there was my mother and my Aunt Linda. With all their feedback, I started making revisions.

March 2010
A month after finishing the first draft, I had finished my initial batch of revisions and began querying agents. It was too soon to be sending the book out, but at the time I felt the book was perfect. Several agents requested to see the first several chapters, and I received some nice feedback, but none of them wanted to represent it.

September 2010
Seven months after first sending out queries, Mickey, an assistant agent with a very large literary agency took an interest in the book. After reading the entire manuscript, he was interested, but was not satisfied with many aspects of the book and asked for a rewrite. This was not what I wanted to hear at the, but at same time, I’d been writing long enough to know he was probably right—the book needed some more work before it was ready for publication. I immediately got to work on the revisions, but it was slow going.

February 2011
I finally completed my revisions on February 11, 2011 and sent the manuscript to Mickey. The book was vastly improved and I felt like at that point I’d written the best book I possibly could. I was confident the agent would love the book and that a big book contract was in my future. It was an agonizing two month wait to hear back from Mickey, and when he finally did get back to me, he decided to pass on the manuscript. To say I was disappointed would be an understatement. It was by far the most devastating rejection I’d ever gotten. Still, writing isn’t for someone with thin skin. I read over the extensive notes Mickey sent me with his rejection letter and reexamined the book yet again. Some of the issues he brought up I agreed with, leading to further revisions. Some of his critiques I flat out disagreed with and refused to change.

While I ended up not getting signed by the agency Mickey works for, his feedback was invaluable and the book wouldn’t be what it is without his critiques. For that I’m grateful.

October 2011
After the major rewrite and rejection, it was back to querying agents. It was a frustrating process. Of the fifteen agents I queried over the next seven months, only one of them requested to see the manuscript, and that agent was not in love with the book. At that point, I began to submitting the book directly to big publishers, hoping somehow the book would rise to the top of the slush pile. No such luck.

In the meantime, I was working on several other projects. By this point The Roads to Baldairn Motte was out, I was starting a new novel, and I had completed work on several freelance book editing projects. It was one of these freelance projects that got me in contact with Liz Kracht, the woman who ended up becoming my agent. Liz was working with one of the projects I had done some freelance work on and I mentioned to her I had my own novel I was shopping around. She asked to see it, and viola, all of a sudden I was signed with her at Kimberly Cameron & Associates. After all the work I did following the formal process of finding a literary agent, it was a chance encounter that ended up getting me signed.

February 2012
After having me make a few minor revisions to Dreamwielder, Liz began sending out queries to publishers in early 2012. It’s amazing how much difference having an agent makes. Editors immediately began requesting the book. We got great feedback, including  very flattering compliments from some of top publishers in the fantasy genre, but none of the editors were in love with the book. Not yet, at least.

November 2012
Nine months after we first started querying, Diversion Books responded, and they did love the book. They made an offer, and after a couple of weeks of ironing out the contract details, we inked the contract. Five years after my mother dreamt up Makarria and her ability to wield her dreams, the book has finally found a home. It’ll be several months still before the book is ready to download to Kindles, Nooks, and iPads, but in the grand scheme of things, that’s pretty damn fast really!

More news to come as we get closer. Happy holidays!