Terrorism, Climate Change, Mass Hysteria – This is Why I Write Spec-Fic

In his personal essay, “Almost California,” Chuck Palahniuk says, “That's why I write, because life never works except in retrospect. And writing makes you look back. Because since you can't control life, at least you can control your version.” As a teacher, I make all my creative non-fiction students read this essay because I think it poignantly defines what autobiographical writing is all about. As a writer, I take this idea a step further and ask myself: why do I write spec-fiction? Hell, why do I write at all?

In the summer of 2010 I worked on a clean-up barge in response to the BP oil spill in the Gulf of Mexico. As I wrote here on this blog afterward, it was a highly frustrating experience—my hunch that the clean-up vessels were being chased off so BP could sink the oil into the ocean, thereby avoiding damaging photo ops, turned out to be right on—and I was newly inspired as a writer. In my own words, “I (re)adopted the strategy of trying to write stories with relevance to the real world...” 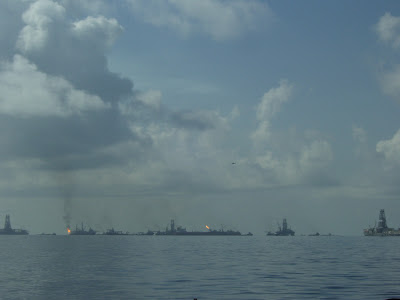 I said “(re)adopted” because writing stories with social relevance has always been in my DNA. Just several years prior, sometime after 9/11 and the US invasion of Iraq, I became enraged at the erosion of our civil liberties thanks to the Patriot Act and the creation of Homeland Security and TSA. I wrote “The Republic,” a dystopian tale that warned of the dangers of openly welcoming government control for the sake of protecting ourselves against terrorists. The story was published in the Australian publication Wet Ink in 2009, and I moved on to address other concerns in my writing.

And then this: two weeks ago a CNN poll tells us 40% of US citizens are willing to give up civil liberties to protect our country from terrorism.

The most appalling part is how CNN phrases it: “Although worries about terrorism have edged up following the Boston Marathon bombings, a new national poll indicates only four in ten Americans say they are willing to give up some civil liberties to fight terrorism” (emphasis mine), as if it's surprising we're not all—every single one of us—clapping our hands for less freedom. Take the 40 percent of people who openly admit they're cool with giving up freedoms, add in the percentage of people who are too apathetic, uninformed, or disenfranchised to speak up in protest, and where does that put us? 50 percent? 60? 80?

This is why I write. Because this makes me angry as hell.

For the record, let me be clear, the Boston Marathon bombings were horrible, as were the 9/11 attacks. I'm not disputing that. What I can't stand for, though, is our response as a supposedly enlightened, modern society. Giving up our rights to privacy? Willingly putting an entire city on lock-down—damn near marshal law—for two days to find and capture two suspects? Hell no. 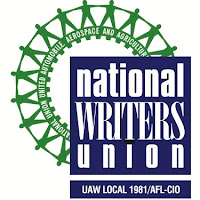 Two days after the Boston Marathon, a huge explosion at a fertilizer plant in Waco, Texas exploded, killing 15 workers. In his monthly letter to National Writers Union members, union president Larry Goldbetter rightly pointed out that press coverage and the government response was completely fixated on the Boston bombing, where only 3 people died. No one was scrambling to inspect factories for safety and protect workers. No one was trembling in fear they might die at their workplace the next morning. Instead, we let the news whip us into a frenzy about terrorism.

In his newsletter, Goldbetter pointed to an article in In These Times from Mike Elk, which highlights the Waco fertilizer plant's safety violations and the fact that the plant hadn't been inspected by regulatory agencies since 1985. Furthermore—and more to point—Elk provides a staggering statistic: the chances of dying in a workplace accident are 270 times higher than dying in a terrorist attack.

In fact, according to a 2011 article in Reason magazine, your chances of dying in a terrorist attack are 1 in 20 million. 1 in 20 MILLION! “In other words,” Ronald Bailey, author of the article, says, “in the last five years you were four times more likely to be struck by lightning than killed by a terrorist.”

So again, why all the attention and worry about terrorism? Why exactly are we giving religious fundamentalists exactly what they want in letting them scare us into changing the way we live?

This is why I write.

I don't have the answers, but I am observant, and I understand the rhetoric of the power players in our world. Terrorism is good business. It keeps the military industrial complex going strong. It provides leverage for politicians and their agendas. It makes us loyal little consumers, keeps us buying everything from guns to mini 4-oz toothpaste tubes so we can get onto an airplane with our carry-on bag after having been humiliatingly stripped down and searched. Perhaps most significantly, it drives up T.V. ratings and keeps us mesmerized, glued to the screen so we're a captive audience for advertisement after advertisement.

Ray Bradbury always warned readers in his stories about the dangers of television and being entertained into slavery. Wasn't anyone listening?

This is why I write speculative fiction. I don't have the answers, but I can illuminate the problem through a story, extrapolate and speculate, and maybe get people to think. Chuck Palahniuk knows how to make us examine our obsession with materialism and vanity through his weird blend of literary and transgressive fiction. I try do a similar thing through my blend of dark speculative fiction. Certainly I'm not comparing my talent or clout to Palahniuk's or Bradbury's or anyone else's, but even if I only manage to reach a few people with my writing, I feel I've done my job. And really, what other options do I have? I'm no good at politics. I don't have money to lobby politicians. I don't do well at following orders, and protest organizers would find me as much a nuisance as the military would. So I write.

Like most people in our country, I'm economically trapped. I don't have the means to buy an electric car, solar panels for my roof, or live a life independent of fossil fuels. I can't afford to protest the XL Pipeline with 350.org and get arrested. But I can write blog posts like “Fahrenheit 2011” and “Curbing the Apocalypse.” I can write a novel like Dreamwielder where I really learn my craft as a storyteller and begin to explore the themes I'm passionate about. And I can write my work in progress, the spec-fiction novel Remember the Future. If I do it well, maybe I can even help in some small way, because the world is changing. While we're all glued to our televisions worrying about terrorists and pissing away our freedoms, our oceans are inching higher, our food supply is one step closer to annihilation at the hands of drought and blight, and fresh water—the very substance that makes our lives possible—is disappearing down the toilet.