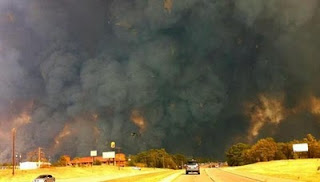 It's September again, and for me that means back to teaching. Among the six classes I'm teaching this year, two of them are noteworthy—two classes that at first glance might seem unrelated, but to my mind are inextricably linked. The first is a dystopian literature course at the Orange County High School of the Arts. The second is a composition course at Chapman University, writing about ecology, in which we are reading extensively about the impact of climate change.
Amazingly, people the world over seem to think global warming is still a theory under debate, or worse, that it's a hoax. Let me be clear, there is no debate. This is no hoax. The data is overwhelming. There is no argument within the scientific community whether global warming is real. The only discussion is how bad will it get, and how can we curtail the damage.

It's not difficult to discern where the public confusion is stemming from. All you have to do is follow the money. 7 of the 10 biggest companies in the world are oil or energy companies, and there's still a lot of money to be made from ensuring our world economy is dependent on oil and coal. In the same way the tobacco industry outright lied about the health effects of smoking for decades, the oil and coal companies are spreading lies about climate change. So, is it any surprise that 9 of the 10 most prolifically published climate change deniers are directly linked to Exxon?
Along with these mercenary pseudo-scientists, we also have the guys who are so consumed with their politics and capitalist zealotry, that they're convinced global warming is a conspiracy concocted by the political left to scare the public into voting them into power, douche-bags like Larry Bell, who cherry pick individual statistics and take quotes from real scientists out of context to make it look like climate change is a hoax.
Yes, we are all entitled to our own opinions, but not all opinions are equal. I'll leave Bill Maher to explain it better than I can:
Don't get me wrong here. I'm just as happy as the next guy for the great conveniences oil has brought us. I love fast cars and motorcycles, I like being able to jet across the globe in less than a day (when I can afford it), I like to blast the A/C when it's stupidly hot outside, and I appreciate the convenience of having an abundance of readily available produce at the grocery store thanks to petroleum-based fertilizers. The party we've been having the last hundred years has been great, but like all parties, it has to end eventually. The world we've created for ourselves is in big trouble, and if the unwashed masses don't realize it soon and start making big changes, we're going to be in even bigger trouble.
All this leads me to ask: when the fuck is the new generation of novelists and short fiction writers finally going to write something worthwhile that really drives home the dire situation humans are facing? In the decades past we had George Orwell, Aldous Huxley, Ray Bradbury, Kurt Vonnegut, and dozens of other great writers who showed us the potential dangers civilization faced with their dystopian visions. And yet, here we are facing a very real crisis, and the writing community is silent?
Back in August of last year, after helping with the clean-up efforts of the BP oil spill in the Gulf of Mexico, I vowed to write with a renewed purpose, and the issues of over-industrialization and climate change have continued to be themes in my work. Industrialization and the erroneous notion that man can conquer nature is an underlying theme of Dreamwielder, the novel I recently finished writing, and I have several short stories and a new novel in the works that will make the issue of climate change an even more prominent component. But am I alone? I know I can't be. It's only a matter of time before the message gets out there—whether as an underground insurgence of short fiction, or the next best-selling novel. The thing to worry about is whether the people will take the message to heart, and whether it will be too late maintain civilization as we know it.
Either way, I'll be here, still writing what I think is important, even if my writing time is limited because I'm constantly having to fend off armed marauders in order to protect my little plot of organic farmland after the apocalypse. Hell, it even might be fun. Just because I'm a proponent of environmental issues, doesn't mean I'm a peace loving hippy.
Posted by Unknown at 12:54:00 PM