An Annotated Bibliography for Science Fiction and Climate Change

So, I just finalized a magazine article I've been working on for the last couple of weeks called "Can SF Save the World From Climate Change?" Hopefully, the article will be coming to a science fiction magazine near you soon, but seeing as how my research led me to some great reading material on the subject, I figured it'd be helpful to share my sources here and now. Below you'll find the annotated bibliography I included with my article, everything from the most up-to-date prognosis on our planet to the newest trends in literature dealing with climate change. I'd like to give a very special thanks to Bill McKibben of 350.org for taking the time to provide me with some of these great resources and for weighing in on the idea of SF inspiring creative solutions for dealing with climate change. Likewise, I'd also like to give a special thanks to John DeNardo of SF Signal. Thanks, gentlemen!

Climate Change: The Reality of the Situation

McKibben, Bill. “The Reckoning.” Rolling Stone. Issue 1162, August 2012. The popular article that drove home the notion that we’re already experiencing the effects of global warming. In addition to laying out the
three numbers dooming our planet to drastic ecological changes, the article takes a closer look at the fossil fuel industry and how we can go about taking the profits out of polluting the planet. 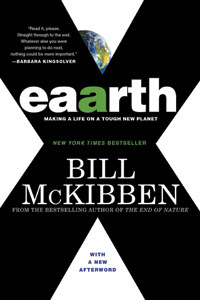 McKibben, Bill. Eaarth: Making a Life on a Tough new Planet. Times Books. New York, 2010. This book lays out the staggering amount of data proving human activity has led to global warming, argues that the effects are going to be worse than early climate models predicted, and posits a strategy for adapting to a new world: abandoning the notion of perpetual economic growth and moving toward sustainable localized communities.

McKibben, Bill. “What the warming world needs now is art, sweet art.” Grist.org. April 22, 2005. “Art in a Changing Climate.” Grist.org. August 6, 2009. These two opinion pieces lay out McKibben’s case for why art and literature are important in teaching us to adapt to a changing world.

Hansen, James, et al. “The New Climate Dice: Public Perception of Climate Change.” NASA, Goddard Institute for Space Studies. August 2012. This article details all the climate data showing an increase in global temperature over the last several decades and suggests the “dice” metaphor as a way to explain to the general public the outcome of global warming: increased, more severe weather incidents.

NASA. “Explaining Rapid Climate Change: Tales from the Ice.” A good overview of how scientists are able to analyze Arctic ice core samples to draw a picture of how climate has changed over the last 800,000 years and conclude that human activity has increased recent rising global temperatures. 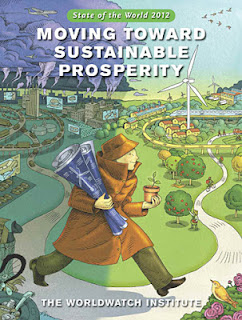 The WorldWatch Institute. State of the World 2012: Moving Toward Sustainable Prosperity. Island Press. Washington, 2012. This installment of the 20+ year running series lays out plans for a sustainable economic model, as opposed to the current model, which is predicated on rampant consumerism, squandering natural resources, and perpetual economic growth. State of the World 2011 from W.W. Norton & Company lays out models for sustained agriculture. Ironically, the most innovative, cutting-edge advances in agriculture are taking place in poor 3rd world countries.

Glass, Rodge. “Global warning: the rise of ‘cli-fi’.” The Guardian. May 31, 2013. Similar to the above article, this article chronicles the rise of cli-fi from a broader, less literary perspective.

Stephenson, Neal. “Innovation Starvation.” Available at various sites online, this article is Stephenson’s response to his humbling experience at the 2011 conference, Future Tense, and lays out the philosophy behind Project Hieroglyph. A must read for fans of SF fans, as well as engineers, scientists and inventors.

Project Hieroglyph. The joint  project between Neal Stephenson and Arizona State University to create a collaborative community between SF authors, scientists and engineers, with the goal of breaking stifling paradigms in the technology world.

That's all for now. I'm off on a short vacation and then it's back to work on the new book!