As my lack of new posts here probably indicates, April was a busy month for me. The shenanigans kicked off with a great hike in the California redwoods with fellow authors Ahimsa Kerp and Craig Comer. A week later, I turned 40, and my wife threw a steampunk themed party for me where I got to see a lot of great family and friends (and eat cake, of course).

Since then, it's been all about prepping for our new baby, due in the coming weeks. My wife and I don't have a big place, so my writing office is now a combo writing office/nursery. (I figure this will last a year or two at best, and then the kid will kick me out and I'll be relegated to writing in the garage or the backyard.)


I did manage to get some creative stuff done, though, including finalizing the new album with my band Wheel House. The album, Filthy, officially launched Tuesday and is available from all major online retailers and hopefully streaming on Spotify and the likes now. 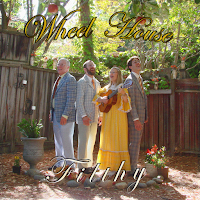 I'd also like to recommend two new novels that just came out.


Craig Comer's debut novel, The Laird of Duncairn, a historical steampunk/fantasy was released in paperback on Tuesday (ebook drops sometime next week, I believe).


Also, The Guns Above, a steampunk/military/action-adventure from author Robyn Bennis, whom I interviewed here several months ago, also came out Tuesday. Turns out it was a big day!