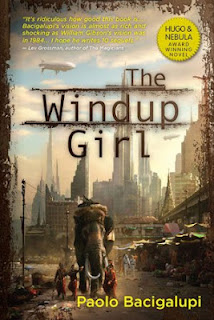 At FOGcon 2017, I'm moderating a panel on climate change and the geography of daily life. To facilitate our conversation, I put together this list of notable climate fiction (cli-fi) written specifically by science fiction and fantasy authors. I should point out that there is a much larger body of cli-fi work from writers in mainstream fiction, but I'm not including them here. Additionally, I'm inclined to include SF novels based on other planets, as well as secondary world fantasy, if climate change is one of the over-arching conflicts or themes.

Just a couple of other quick notes on the list. This will be a working document that I'll update periodically. As such, please share any books you think should be added in the comment section.

Unless the annotations are in quotes, they come from me. Having said that, I haven't read all these books (yet), so some of the annotations are simply me paraphrasing plot summaries from the publisher or author's website. (To that end, if you're making a book recommendation in the comments, feel free to write your own original annotation, and include a link to your homepage or social media handle and I'll quote you in the main article itself if/when I add the book.)

Lastly, I drew upon several sources while compiling this list. You can find my sources at the bottom of the list, along with links. Also, I've attributed and linked any direct quotes I took from other sources. Enjoy!

Loosed Upon the World: The Saga Anthology of Climate Fiction
This short-fiction anthology brings the heavy hitters in the field: Bacigalupi, Kim Stanley Robinson, Buckell, Silverberg, Seanan McGuire. I’ve not personally read the anthology, but I’ve read several of the stories elsewhere, including “Entanglement” by Vandana Singh, which is probably my favorite short story written in the last decade or so.

Year of the Flood
The second book in Atwood’s dystopian trilogy, which also includes Oryx and Crake and MaddAddam. While Atwood might protest to her work being included on this list, I’m including it here since it’s so often cited as the big name in cli-fi.

The Drowned World
Written back in 1962, this book predates our knowledge of global warming actually being a thing. In Ballard’s classic, it’s an increase in solar radiation that causes global warming and massive flooding (as the title of the book might suggest).

Mother of Storms
In this 1994 novel, a missile strike in the Arctic unloosens massive amounts of methane into the atmosphere, causing rapid and catastrophic climate change.

Flood
“Flood is part disaster novel and part apocalyptic fiction. It documents the rising level of Earth’s oceans, which is occurring at an alarming rate, more than can be attributed to global warming alone.” –John DeNardo, Kirkus Reviews

The Windup Girl
The Water Knife
Ship Breaker
The Drowned Cities
Pump Six and Other Stories
Bacigalupi is pretty much the face of cli-fi in the SF/F world. The Windup Girl is an amazing distant-future story that imagines a world ravished by not only climate change and rising sea levels, but also genetic engineering and other bio-engineering “solutions” gone awry. The Windup Girl was the winner of Hugo and Nebula awards for best novel in 2010. The Water Knife is a more near-future (and more depressing) vision of the American southwest, and Ship Breaker and The Drowned Cities are YA novels set in the same world as one another. Pump Six and Other Stories is his collection of short fiction.

Earth
I haven't read this one. The plot synopsis mentions something about a black hole in the center of Earth, so not sure it fits the cli-fi criteria. Please weigh-in in the comments.

Hurricane Fever
Looks like a thriller set in the Caribbean, where climate change is the backdrop. Please weigh-in in the comments if you've read it.

Parable of the Sower
Parable of the Talents
I haven't read these yet, but looks like they might tie into climate change thematically. Please weigh-in in the comments if you've read them.

Walkaway
"Fascinating, moving, and darkly humorous, Walkaway is a multi-generation SF thriller about the wrenching changes of the next hundred years…and the very human people who will live their consequences." –book jacket blurb

Forty Signs of Rain
Fifty Degrees Below
Sixty Days and Counting
New York 2140
“The Science in The Capital trilogy consists of three novels by Kim Stanley Robinson that explore the interaction of science and politics in the United States capital, Washington, D.C. Because of their basis in realistic situations, their depiction of topical themes and their setting in a time quasi-concurrent with the present at the time of their writing, they are notable for the sense of urgency that transpires from them. Serious weight is given to the need to tackle climate change on both national policy and international relations levels.” –Teaching cli-fi

2312
As the title suggests, this is set in 2312. Humans have expanded through our solar system. Designing and rehabilitating habitable worlds plays a major theme.

The Osiris Project
A trilogy of novels, “set around four hundred years in the future, in a world which has been radically altered by climate change.” –https://ejswift.co.uk/osiris/

Welcome to the Greenhouse
An anthology of climate fiction from various SF/F authors. Overall, a bit underwhelming, but it contains some noteworthy stories from M.J. Locke and George Guthridge, in particular.

Bannerless
“Decades after economic and environmental collapse destroys much of civilization in the United States, the Coast Road region isn’t just surviving but thriving by some accounts, building something new on the ruins of what came before.” –Eco-fiction