It was good to get back to a convention finally. I didn't get to spend as much time at WonderCon as I would have liked, but still got check out a few panels on Friday and Saturday. Here's a quick recap.

Friday wasn't too crowded. I walked the main exhibit hall with my wife and we met up with spec-fic author Craig Comer to check out a panel on trans-marketing creative projects. The highlight of the day for my wife was catching close-up glimpses of Lou Ferrigno and Margot Kidder. For me, it was just fun to see everyone dressed up and the spectacle of it all.

Saturday I went solo. It was much more crowded and security was amped up, partly, I assume, because of the militant Christian evangelists there. One guy, whom I dubbed Drill Sergeant Preacher, took exception to my Cthulhu fish t-shirt and screamed at me, "I SEE THAT YOU LOVE YOUR FALSE PROPHETS MORE THAN YOU LOVE JESUS!!!" I just smiled and snapped a photo. I'm not sure what exactly he was hoping to accomplish. Do fire and brimstone sermons still work in the 21st Century?

Inside the convention center, I caught the panel on Fantasy Fiction, moderated by Maryelizabeth Hart from Mysterious Galaxy and featuring Arwen Elys Dayton, Todd McCaffrey, Naomi Novik, and Greg Van Eekhout. The conversation got started with the panelists responding to
this recent article in The Guardian about how fantasy fiction is perhaps finally gaining respect from the literary world, largely thanks to George R.R. Martin and now the new literarary/fantasy novel from Kazuo Ishiguro, The Burried Giant. Several of the panelists were offended that the article glossed over many notable fantasy authors, particularly female greats like, um, some lady named Ursula K. Le Guin.

Having read the article myself now, I agree with the panelists and take further exception to fact that the article is utter shite. The author posits the idea that fantasy fiction is breaking through the genre ghetto to gain mainstream and literary respect, but then provides no evidence to support the claim. Instead the author provides a tedious and rudimentary plot summary of A Song of Ice and Fire, The Burried Giant, and throws in obligatory mentions of C.S. Lewis, Neil Gaiman, Terry Pratchett, and Harry Potter (although, oddly, not J.K. Rowling, the author...). The article is a pointless yawn-fest, and I'm dumber for having read it.

In any case, back to WonderCon and the panel. After the discussion about the aforementioned article, the panelists moved on to discussing inspirations, magic, dragons, and all sorts of fun stuff. After the panel, I hit the main exhibit hall one more time, where I got a chance to talk briefly to Kevin J. Anderson and pick up a copy of his Clockwork Angels, which is based on a story from Rush's Neil Pert. Looking forward to reading it when I get a chance.

All in all, it was a great weekend, capped off with a great show performing with my band Wheel House Saturday night. As you might expect, I spent Sunday recuperating, and now it's back to normal life... 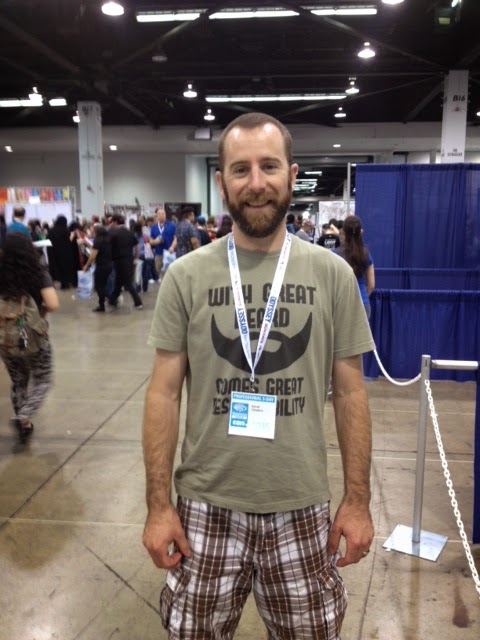