Welcome to the World of Transgressive Fiction.

This Fall I have two new short stories coming out in anthologies, one a high seas adventure forthcoming in Pirates & Swashbucklers (to be released on Talk Like a Pirate Day—Arr!), and the other a very odd tale in Fracas: A Collection of Short Friction, available now! As the editors describe it, Fracas is an anthology of transgressive fiction, a genre some readers might not be familiar with. So as a public service, here's the quick and dirty on what the genre is all about, as well as some reading recommendations from the contributors to Fracas. 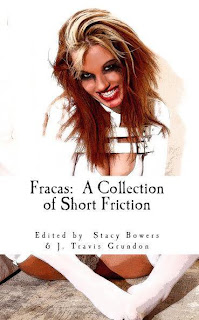 The Lowdown: Transgressive fiction seeks to find meaning in the human condition by running roughshod over societal norms and exploring the extreme boundaries of existence.

The Effect: Like watching the couple next door get in a knock-down, drag-out fist fight on the front porch, then hearing them go inside for some loud, raucous fucking—disturbing, but at the same time enthralling and thought provoking, if you dare let your mind go there.

Transgressive Authors and Books to Read (as recommended by the editor and writers of Fracas):

J. Travis Grundon, Editor: Haunted by Chuck Palahniuk, The Perks of Being a Wallflower by Stephen Chbosky, The Bus Driver Who Wanted to Be God & Other Stories or anything by Etgar Keret, The Acid House by Irvine Welsh, and Less Than Zero or American Psycho by Bret Easton Ellis.

Joe Schwartz: In a round-a-bout way I recommend Stephen King's pseudonymous Richard Bachman, most especially his almost prophetic story The Running Man. Before it was a completely over-the-top shit movie starring everyone's favorite Austrian, it was a damn good dystopian story that saw the future as a world of haves and have-nots organized via their impossible-to-turn-off TVs installed by a Orwellian shadow government referred to as the Network. Two things about that book. One, the chapters are given in reverse chronological order, that is a countdown. How finite. Second, when the twin towers fell on 9/11 I couldn't help but think of the ending to this book. On a sidenote, it is rumored that King wrote the fucking thing in a weekend high on cocaine.

Me: I recommend Fracas, of course, and also American Psycho by Bret Easton Ellis. The book is seriously fucked up, but I couldn't put it down. Also, not sure if it counts, but maybe one of the first transgressive novels ever written, I highly recommend Hunger by Knut Hamsun.

Check out this interview with me on Kameron M. Franklin's blog, Pens & Swords. Kameron is a fellow contributor to Pirates & Swashbucklers. In the interview, we talk about my pirate piece included in the anthology, as well as genre and why I'm sort of all over the place as a writer—spec fiction, literary fiction, transgressive fiction, erotica, you name it.

The Roads to Baldairn Motte, the fantasy novel I co-wrote with Craig Comer and Ahimsa Kerp just got its first full book review from Rogue Blades Entertainment. Reviewer Keith West says of the book: "All in all, The Roads to Baldairn Motte contains some of the best and most thought provoking studies in heroism at the individual level that I’ve seen in quite a while." Quite a glimmering endorsement, if I do say so myself.