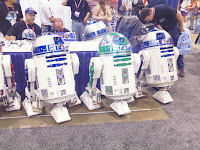 It's almost been a month now since Dreamwielder came out, and as you might expect, I've been a busy bee. I capped the month off yesterday w/ a quick visit to WonderCon, which is essentially ComicCon Lite. I did a quick run through of the main exhibit hall where I witnessed everything you might expect—crazy costumes, a boatload of comic books, and these cool R2 droids—and then it was off to the panel discussion I really wanted to see, "A Story is a Story." Patrick Rothfuss was one of the panelists and he was hilarious and insightful. All in all, it was a good time.

I came home to find that Dreamwielder has moved up into the top 300 bestselling ranks for Barnes & Noble Nook books. This is in large part due to the book's selection as a Nook First Look book, which I'm very proud to be included in. The boost in sales rankings means Dreamwielder is now on page 2 of the best sci-fi and fantasy novels under $4. It's pretty amazing to see my book right alongside major hits from John Scalzi, Robert Jordan, George Orwell, and Edgar Rice Burroughs. 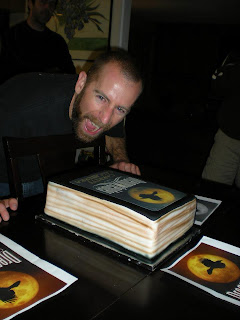 In addition to the Nook First Look selection, Dreamwielder has been getting some nice coverage from bloggers, and I've been hard at work hustling up reviews and guest blog posts. Here's a recap and links to everything Dreamwielder related.


Reviews
Interviews
Guest Blog Posts on the Craft of Writing
-Garrett Calcaterra
Posted by Unknown at 11:16:00 AM