Readers of this blog have heard the name Craig Comer often enough in the past. He and I go way back, and along with Ahimsa Kerp, we co-authored the mosaic novel The Roads to Baldairn Motte. In addition to both of us being writers, we both love to travel and backpack, although he’s much more well-traveled than I. He also knows a hell of a lot more when it comes to history.

That being the case, it’s not surprising that Comer’s new novel, The Laird of Duncairn, is as much about travel and historical settings in Scotland as it is about magic and steampunk. In this interview, we discuss what the new book is all about, what inspired it, and what Comer has in store next.


GC: This is your first full-fledged novel to come out, so first of all, congrats! I know this book has been a long time in the works. How does it feel for it to finally come out? 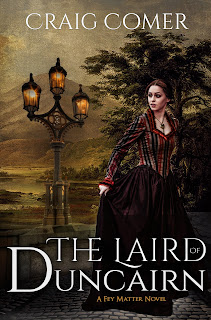 CC: Thank you, and thanks for hosting me! I’m excited beyond belief. I’ve been working on The Laird of Duncairn for the better part of five years, with the final draft completed over two years ago. Having the book in my hands is such a great thrill.

GC: For readers that are new to your work, what’s the lowdown on the book?

CC: In an alternate version of 1880’s Scotland, a new fuel source is discovered that will replace the dominance of coal. But as the lords of the empire race to control its production, an ancient foe returns to terrorize the countryside.

Effie is an orphaned Sithling—someone with both fey and human blood—and her kind are hunted by a government who has used propaganda to ostracize them from society. So she has instant adversity and enemies, but as an orphan, she doesn’t really know much about her own people, nor whom to trust. She’s curious to a fault, and it’s that conflict between her need for understanding and her need to remain safely hidden that drives her actions.

The book follows Effie’s adventures as she is embroiled in the intrigue of coal barons, fey hunters, and rampaging eldritch horrors. There are selkies, giants, and flying machines along the way, but at its heart, the book shows that families don’t have to be defined by blood.

GC: What inspired you to write this book?

CC: Like all my great ideas, it started with my wife. I’d written several fantasy short stories in imagined worlds, and she suggested I try writing in a place I knew well. I’d studied history in Scotland and lived there for a year, and fleshing out that setting came at a time when I’d thought of the Effie character. The two blended, and the tale started there. It was fun plopping her into the same pubs and castles I frequented while as a student, only set a hundred years earlier.

GC: Makes sense. I knew you lived in Scotland for a while and was just about to ask that: do Effie's travels in the book in any way mirror the places you've explored in the UK?

CC: They absolutely do. Some of my favorite places in Scotland make “guest appearances” in the book, from Glen Coe and the Isle of Skye in the Highlands, to the Grassmarket and Craigmillar Castle in Edinburgh. I’ve also invented a few places for Effie to explore, but I tried to always reflect actual places I’ve visited, even if the names are different.

GC: Let's talk genre a bit since it's something publishers fret over and readers use to an extent to set expectations for novels they pick up. What is The Laird of Duncairn? Historical fantasy? Steampunk? Regency romance?

CC: I call it Gaslamp Fantasy, which maybe isn’t exactly right but is the closest fit. To paraphrase Leanna Renee Hieber, author of the Eterna Files, gaslamp uses the same 19th century aesthetic as steampunk but uses fantasy elements in place of science fiction. It has ghosts, fairies, and magic systems rather than clockwork devices, gadgets, and mad scientists.

GC: What sort of research did you do for The Laird of Duncairn?

CC: Beyond brushing up on Scottish history, I focused on researching a mythology that wasn’t just a retelling of the Irish fairy courts. Scottish mythology is a hybrid of the Celtic and the Norse, and I found the tales from the Orkney and Shetland islands fascinating and fresh. So I used those where I could and plan to use more in the future.

GC: Tell us something about The Laird of Duncairn that is not found in the book description.

CC: Though the book is only loosely historical—the setting is very much my imagining of Victorian Scotland rather than to-the-button accurate—I do have a few historical figures making appearances. And I left them as Easter eggs rather than letting them call attention to themselves. I thought it more fun that way, and it doesn’t alter the story in any way if you don’t catch them.

GC: Your main character in the book, Effie, is a woman. Was your approach to writing her any different than if you had written a male protagonist?

CC: No. Effie is a strong, independent woman whose curiosity and instincts carry her through her adventure. I think those character traits drove my approach more than any thought to gender. If anything, it was how other characters around Effie reacted to her—especially in a Victorian setting—that occupied my thoughts.

GC: Moving on to your craft as a writer. Are you a plotter or a pantser?

CC: More of a plotter, but I’m definitely trying out different techniques. I think that’s important at the start—to try different approaches to writing in order to hone in on your author’s voice. My first novel is pantsed, and it’s sitting on a shelf collecting dust. Its structure doesn’t work at all. For The Laird of Duncairn, I focused on plotting what the big power players would do so that I could see how Effie’s actions impacted them. She’s a small fish in a big sea, so I needed to know everyone’s end-game first, then set her loose among them.

GC: You’ve titled the book with a series subtitle. What's the word on the second book, and when can readers expect it to come out? Do you anticipate the series being a trilogy or something longer?

CC: Book II is written, and I’m in the stages of editing it. I’ll turn it over to City Owl Press shortly, and I hope it will see print by the start of next year. I do have a three book arc plotted out, but there is a lot of room for further installments of the series. I have a few ideas for tie-in novellas as well.

GC: Any other writing projects you're working on?

CC: In addition to the Fey Matter series, I’ve also started plotting out a contemporary mystery series set in a small town in the Pacific Northwest. I want it to have the feel of The Dresden Files meets Midsomer Murders. It should be a lot of fun!


GC: That does sound fun. Okay, last up, what are some books, games, shows, etc. that you've enjoyed recently that you recommend to readers?

CC: I’ve only recently discovered Expedition Unknown and have been watching a lot of that recently. It’s great fun if you’re into travel and unsolved mysteries. For reading, Bill Bryson’s The Road to Little Dribbling and Stephen King’s The Running Man are both enjoyable for obviously different reasons. The first is a fun survey of British culture with Bryson’s usual—if now aging—wit, and the second a page-turning dystopian glance into America’s future. I’d put off reading The Running Man for years because I grew up with the movie, but they are two entirely different things, and I highly recommend reading the book.

CC: Thanks again for hosting me!